Great Day at the Salon Art+Design today in NYC!

Find hereunder some highlights and my picks.

My favorites were Gesture, a wall-mounted light sculpture, and Counterpoise Suspended Light Sculpture both by Niamh Barry. 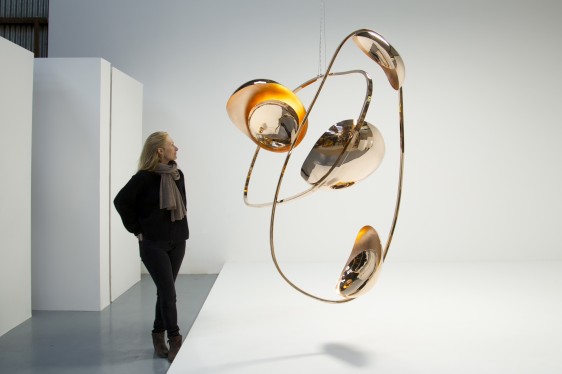 A less known and latter technique of his which is ink on paper rather than tapestry work was also present in the show:

“La Riviere du Paradis Terrestre”, cast iron panels worked with gold leaf and enameled in the blue, beige and red ton. illustrating a stylized river passing under a bridge with swimming fishes. The banks are in leaf.

The Avantgarde Chinese artist has been at the forefront of contemporary ink paintings. The two panels “Along the Vivid Outlines of the Ages[d Ridge, a Wild Stream Splashes  and the Deer Flee in Shock” are made of ink and acrylic on paper. The black on the gold background is so striking and decorative!

Always a pleasure to see a good Leger!

And the coup de coeur…Sam Francis, untitled, 1990 at the Galerie Diane de Polignac